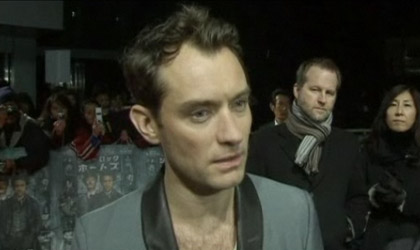 British Hollywood star Jude Law (37) braved the wintry cold of Tokyo yesterday. He was at the Toho Cinema in the Roppongi Hills complex for the Japan premiere of “Sherlock Holmes.” As he walked the red carpet, he greeted 100 invited fans, though he had made them wait half an hour in the 4°C cold snap that hit Tokyo in the last couple of days. While director Guy Ritchie was well wrapped up, Law wore just a gray suit over a white t-shirt. Later, from the stage, he told the audience that he had brought his family with him this time, his sixth visit to Japan.

Law plays Dr. John Watson, faithful companion to the 19th century sleuth, who is portrayed by Robert Downey Jr. (44). Law described his co-star as “the most interesting man I’ve ever met.” He also talked enthusiastically about the possibility of a sequel: “I don’t know if it’s been 100 percent confirmed but it looks pretty good. We always said, if enough people enjoy this…then we would happily make another. And it looks like that’s going to be the case.” The latest take on Arthur Conan Doyle’s classic story is set to open in theaters here on March 12. Since it opened in the U.S. on Christmas Day it has made over $300 million worldwide.