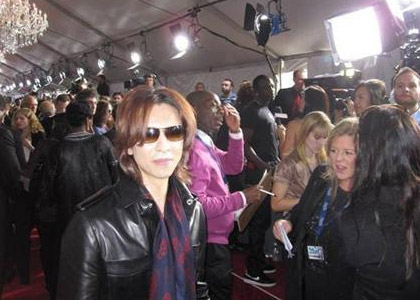 X Japan drummer and band leader Yoshiki confirmed yesterday that they will play the main stage at the Lollapalooza rock festival in August. The event, at Grant Park in Chicago from August 6-8, will be the band’s first concert performance in the U.S. They recently spent over ¥500 million ($5.5 million) shooting some promotional videos in Hollywood, which in itself was something of a dream come true for Yoshiki. A voting member of the Recording Academy and based in Los Angeles, he was at the Grammys at the weekend and broke the news to the press. If true, X Japan will be the first Japanese artists to perform on the main stage at Lollapalooza, though sources say the details are “almost” complete and, contrary to some Internet rumors, they won’t be headlining.

X Japan are of course a band with legendary status at home, with perhaps the most fanatical fan support in the country. Many of those fans will no doubt be planning to cross the Pacific to see their idols perform alongside some of the biggest and best rock acts in the world. But even with close to a quarter of a million people attending, tickets for the 3-day event will likely be hard to come by. Partly thanks to the general boom in all aspects of Japanese pop culture, X Japan have a growing overseas fan base, but tragedy and personal problems have so far conspired to stop them from achieving their ambition of becoming global artists. Since their long-awaited comeback almost two years ago, they have announced several shows in the US and Europe, but they’ve yet to actually play outside Asia. So if they do finally make the stage at Lollapalooza, they will no doubt be looking to steal the show.
Earlier story:
X Japan Finally Realize American Dream (Jan. 12, 2010)