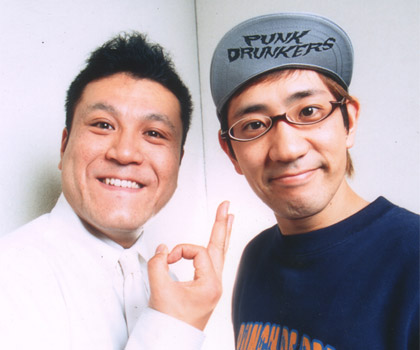 Management for comedian Shibata Hidetsugu (34, photo right) says his recently announced leave of absence is due to health problems and not woman trouble. One half of the popular manzai duo Untouchable, Shibata is taking an indefinite break from entertainment as of this month and is being treated at home. His agency said that he is still undergoing medical tests and they may make further announcements when the results are known. In the meantime, his comedy partner Yamazaki Hironari (34, photo left) will be going it alone on several shows on TV Asahi and TBS radio for the foreseeable future.

Untouchable made their breakthrough in 2004 when they won the M-1 Grand Prix comedy contest and have been TV regulars ever since. In February 2007, there were rumors of a split between Shibata and his former dancer wife (27). He was hospitalized with acute hepatitis in December of that year, but in 2008 his wife gave birth to their second child.

Goto Maki Still in Mourning
Singer Goto Maki (24) has canceled a concert appearance scheduled for February 8. Her management agency says she is still recovering from the suicide of her mother on January 24. Goto updated her official website yesterday and thanked fans for their messages of sympathy and support. “I want to move on and be positive in my music career,” the former Morning Musume member said. “My mother was looking forward to my next project, and I will do my best to bring it to you as soon as possible.”
Earlier stories:
Mother of Gomaki in Apparent Suicide (Jan. 25, 2009)