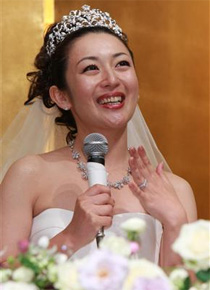 Actress Sakai Miki (30) looked radiant as she and her doctor husband (34) tied the knot at the Hotel New Otani in central Tokyo yesterday. She wore the traditional shinto wedding kimono and headgear before changing into a white wedding gown, set off by a diamond ring, necklace and tiara. About 260 guests, including actor Ishizaka Koji (67) and actress Daichi Mao (52), attended the wedding reception, which was presided over by freelance announcer Tokumitsu Kazuo (67). Sakai’s new hubby is a doctor at a university hospital in Tokyo. His medical colleagues played a comical slide show during the reception describing how he had battled a disease that prevented him from developing an interest in the opposite sex. That is, until he was administered a new breakthrough drug in the form of Sakai. The two met four years ago, when Sakai was doing volunteer work helping organ transplant recipients. They started dating after they met again last summer and got engaged in January. Sakai said at a press conference after the reception that they had registered their marriage yesterday morning at a local municipal office. She added that she wants to have two or three children. Several years ago, Sakai was romantically linked to New York Yankees star Matsui Hideki (profile).

• Also tying the knot at the weekend were Olympic judo gold medalist Inoue Kosei (30) and talento Higashihara Aki (25). Two registered their marriage back in January, but held their ceremony and reception at the Imperial Hotel in Tokyo on Saturday. Inoue announced that his wife is three months pregnant, and that the baby may well be born overseas as he plans to head to the U.K. early next year and spend two years studying there.

• In a less celebratory mood was singer Wada Akiko (58, profile), who had a dig at the recent shotgun wedding of singer Leah Dizon (22). On her TBS show “Akko ni Omakase” she said, “She’s been studying hard in Japan, but so are lots of other youngsters. She needs to study a bit more about her lower body!” And on the comment by stylist Bun (29) about his new bride being very smart, Akko said, “If she’s so smart, she should have been able to date him without getting knocked up!” She also took a swipe at Dizon’s management, who refused to let reporters ask her any questions at the press conference where she announced the marriage. “If you’re not going to let her talk, there’s no point. Don’t have a press conference. Newspaper and TV are about the readers and viewers.” And she finished off with, “Asked what it was that her husband likes about her, she said ‘My Big Peach.’ What an idiot!” The comment was a lame pun on the Japanese word momo, which means “peach” and “bottom.”

• The 21st Tokyo International Film Festival kicked off on Saturday with the screening of John Woo’s Chinese historical epic “Red Cliff, Part 1.” Walking the green carpet (in line with TIFF’s ecological theme) along with Woo were cast members including Kaneshiro Takashi (35), Tony Leung Chiu-Wai (46), Hollywood star Julianne Moore (47) and a host of local celebrities. Newly elected prime minister Aso Taro (68) lived up to his populist image by being the first premier to walk the TIFF carpet. The biggest movie ever made in Asia, “Red Cliff” is to open on 551 screens across Japan on November 1, beating the record for a historical picture set by “Last Samurai”.

• 22 members of Hello! Project are to “graduate” next spring and move to a new management agency. The singers, such as Matsuura Aya (22), Satoda Mai (24) and Abe Natsumi (27), are all veterans of the various groups during the project’s 10-year history and they will pursue mostly solo careers as members of “Elder Club.” Morning Musume, Berryz Kobo and other groups will continue, and presumably recruit a new wave of young performers.