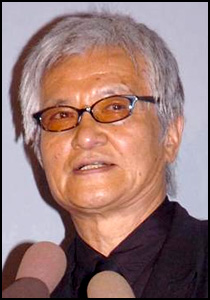 Veteran actor Ogata Ken died on Sunday, it was revealed yesterday. He was 71. He was widely regarded as one of Japan’s finest actors, whose dedication to his craft brought out the best in younger cast members. Real name Ogata Akinobu, the Tokyo native joined the now defunct Shinkokugeki theater group in 1958 and studied under Tatsumi Ryutaro (1905-89). He later married fellow member Takakura Norie and their two sons, Kanta and Naoto, are both actors. Ogata achieved fame on TV when he played the lead role of medieval warlord Toyotomi Hideyoshi in the 1965 NHK taiga drama series “Taikouki.” In 1972-73 he played the lead role of a ninja assassin in the TBS period drama series “Hissatsu Shikakenin,” which led to many other “Hissatsu” spinoffs. A unique and versatile actor, he appeared in countless TV series and more than 60 movies. The best known of Ogata’s films include Nomura Yoshitaro’s “Kichiku,” Imamura Shohei’s “Narayama Bushiko” (The Ballad of Narayama, 1983) and the 2006 Yamada Yoji samurai drama “Bushi no Ichibun” (Love and Honor). Not only a star of Japanese cinema he also appeared in several overseas productions, including Paul Schrader’s “Mishima: A Life in Four Chapters” (1985) and Peter Greenaway’s “The Pillow Book” (1996). Recent projects included the Japanese dub of “The Golden Compass” and last year’s manga adaptation “Gegege no Kitaro – Sennen Noroiuta”. He will appear in the Fuji TV drama series “Kaze no Garden,” which airs from October 9, and he attended a post-production event for the series at the end of September. Co-star Nakai Kiichi said of filming the final scene together, “It left me exhausted and feint, but Ogata-san put so much into it he couldn’t even stand.”