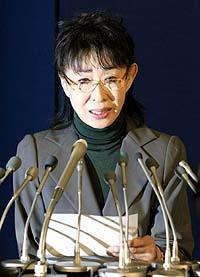 Singer Takahashi Yuya (27) has been arrested again for drug possession. The second son of actress Mita Yoshiko (66, photo), he was detained by police on Thursday evening in Shiba, central Tokyo, after he was found in possession of 0.2g of amphetamines. A convenience store employee has reported his suspicious behavior to the police. It is his third arrest on drug-related charges, the last having been in 2000. A tearful Mita gave a press conference last night and read a joint statement from herself and her husband, former NHK director Takahashi Yasuo. She said that she had persuaded her son to enter hospital in February to undergo treatment for serious depression. Just this last week, the depression had worsened again and they were planning to have him re-hospitalized when he was arrested.

• The Kitano “Beat” Takeshi-hosted Fuji TV variety show “Takeshi no Comaneci Dauigaku Suugakuka” (Comaneci University Mathematics) has been nominated for an International Emmy award. The show airs at 1:15am on Thursday nights. If the show wins, it’ll be a first for Japanese TV. Already widely acclaimed internationally as an actor and movie director, Takeshi (60) plans to attend the November 20 awards show in New York. He said of the show, “I wanted to convey that there is no art form more abundant in creative power than mathematics.”