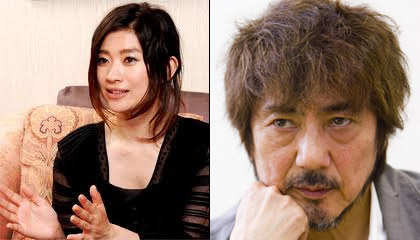 The father of actress Shinohara Ryoko (37, photo left) died just three days after finally seeing his daughter in her wedding dress, it was revealed yesterday. Shinohara Katsuo died on August 17 at a Gunma Prefecture hospital were he had been undergoing treatment for a liver ailment for more than a year. He was 71. On Saturday he was allowed to leave the hospital in a wheelchair to attend a reception held by his daughter and her husband, actor Ichimura Masachika (61, photo right). The couple married five years ago but never held a wedding ceremony.

The father of the “bride” was in tears Saturday when he saw his daughter wearing a white wedding dress. His condition worsened during the event and he left the room. The event was about to be brought to an early close when it was realized they hadn’t had the traditional reading of a letter from the bride to her parents. Katsuo returned for one more emotional scene before he was taken back to the hospital. Ryoko attended his wake and funeral but was too overcome with shock to speak with anyone. She is the youngest of three children and she says she in particular was spoiled by her father. Her mother died in a traffic accident when she was two years old. Her father initially objected strongly to her relationship with the divorced and much older Ichimura. But in the end it was he who persuaded her to hold a press conference to announce their marriage in December 2005.