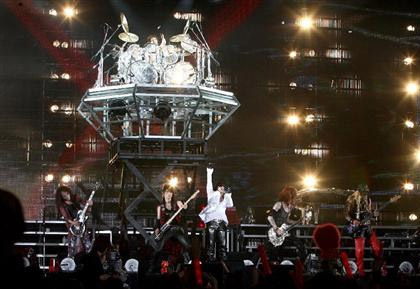 Financial troubles never seem to be too far from Japan’s biggest rock band. Japan Music Agency, who manage X Japan leader Yoshiki, revealed to the media yesterday that they are being asked to pay ¥2 billion for the use of images of the band’s late guitarist Hide. JMA have said that, depending on how things play out, they may take the matter to court. The wrangling over money is just the latest of many that have plagued the group since it achieved commercial success.

Headworks Organization is the company that represents the estate of Hide, who died under controversial circumstances in 1998. The firm is run by his brother Matsumoto Hiroshi (42), who seemed to be on good terms with the rest of the band during a memorial service for Hide held in May. During last week’s two concerts in Yokohama, Hide’s image was used on stage as it has been at all the band’s shows since their reunion in 2008. But the money problems began some time ago.

When X Japan reunited in 2008, they signed a ¥600 million contract with music production company Nexstar Corporation, who put on the band’s concerts. The deal included the use of some recordings, advance royalties and contract money. Nexstar reportedly made some ¥2.5 billion from concert ticket and merchandise sales over the following two years. But JMA never saw the money, and Yoshiki filed a lawsuit with the Tokyo District Court against Nexstar back in March seeking ¥375 million in damages. Headworks has reportedly received ¥300 million from Nexstar, and they have now instructed JMA to pay ¥2 billion to Nexstar or no longer be allowed to use Hide’s image.

The tangled financial web will hopefully not hinder the band’s upcoming assault on North America, with a concert tour due to start in September. As Yoshiki said, “I think the one who is suffering most in this is Hide. But with or without his image, we are still spreading our wings together.”