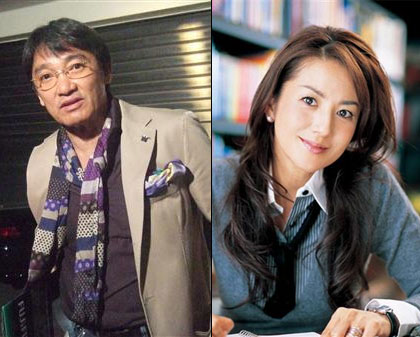 The media is speculating today about a new romance for actor Hagiwara Kenichi (60). Today’s issue of the women’s weekly magazine “Josei Seven” claims that the actor is involved with popular “housewife model” Tomita Rika (48) and that the pair are basically co-habiting at Hagiwara’s Yokohama home. He denied that they are living together, insisting that they are just good friends. But last night Tomita posted on her blog that she had just finalized her divorce from her former husband (52).

Hagiwara, popularly known by his nickname of Shoken, has had a very up and down life. He found fame as a teen rock vocalist in the mid 1960s and became a hugely popular actor in the early 1970s. A drug arrest in 1983 derailed his career for a full year, but he bounced back. There were further arrests, for a traffic accident in 2004 and attempted blackmail in 2005, which led to a suspended 18-month prison sentence and the end of his second marriage. This year, he performed in concert for the first time in seven years.