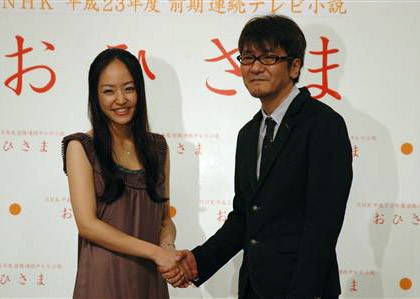 In an effort to boost the sagging audience rankings of its morning drama slot, NHK took everyone by surprise by naming established actress Inoue Mao (23, photo left) as the star of next year’s 50th anniversary series. “Ohisama” will air at 8am on Mondays through Saturdays from March 28, 2011. It is set in the Nagano Prefecture towns of Matsumoto and Azumino, and tells the story of a teacher who becomes a maker of soba (buckwheat noodles). The original script is by Okada Yoshikazu (51, photo right), who also wrote one of the more popular morning dramas, “Churasan,” in 2001.

At a press conference yesterday, the media were visibly taken by surprise when the leading actress’s name was announced. But Inoue herself admitted to having been bowled over by her choice for a morning drama role, something she had dreamed of since she was a girl. “It’s seen as a gateway to stardom for young actors and the auditions are very competitive. I had half given up that my name would ever be called, so I was very surprised,” she said. She added that she had watched the 2007 series “Chiritotechin” without missing a single episode. “I thought it seemed like a tough job. Portraying the life of one person for such a long time, it must need both physical and mental strength.”

The NHK morning drama slot is usually reserved as a vehicle to launch the career of a promising young actress, such as Tanaka Miri and Konishi Miho. During the 1960s to 80s, the morning drama slot enjoyed solid audience ratings of 30-40%, but that has fallen to around 10% in recent years. The current series, “Gegegeg no Nyobo” had the worst ever ratings for an opening episode, and though it has since been doing reasonably well, it rarely breaks the 20% barrier. 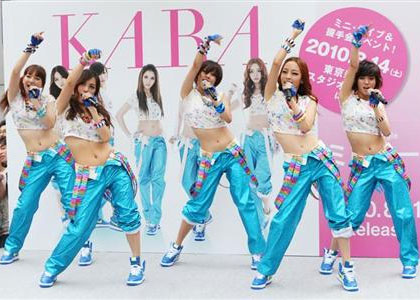 A surprise appearance yesterday in central Shibuya by South Korean pop newcomers Kara drew an unexpectedly big crowd. With schools on summer break, the Tokyo shopping district was even more overflowing than usual with young people. So when the female pop quintet were announced on a stage in front of the iconic 109 building, a crowd quickly began to form. The group were making their major label debut in Japan and performed their debut single “Mister,” which made it to No.5 on the Oricon daily chart rankings.

They were scheduled to appear for 30 minutes, including interviews and a photo shoot, but as the crowd built to an estimated 3,000 people and started spilling out onto the roads, it was decided to cut the event short after just the one song. Disappointed fans will have a chance to meet the group at an event in Shin Kiba on August 14.