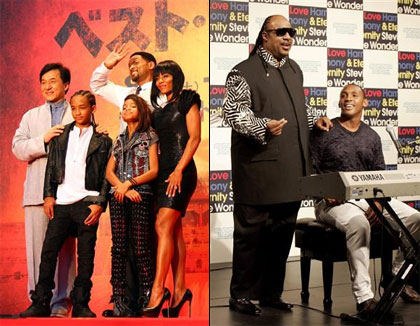 Some young stars in Tokyo this week, with their high profile dads in tow. Hollywood big shot Will Smith (41) was in town with the whole family, though it was actually his son Jaden (12) who was working. He and co-star Jackie Chan are promoting their remake of “The Karate Kid” and attended the Japan premiere at the Roppongi Hills complex in central Tokyo last night. At the Roppongi Hills Arena, they appeared on stage for about 2,000 fans. The movie will be released here, like the 1984 original, with the title “Best Kid” on August 14.

Also appearing for fans yesterday was Stevie Wonder (60), and he too brought his son along. He is celebrating his 50th year in the music business, while son Mumtaz (25) is a highly regarded R&B/hip-hop artist/producer/singer. Stevie is scheduled to perform at the Summer Sonic music festival this weekend, and is also promoting his new album “Love, Harmony & Eternity,” which went on sale here on Wednesday. 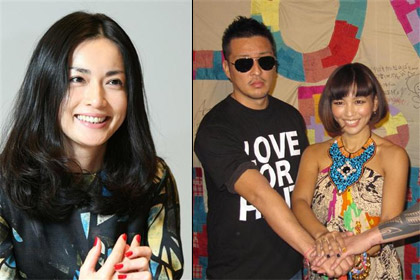 A couple of actresses were involved in minor traffic accidents recently, according to stories on the Sankei Shimbun website. Police at the Akasaka station in central Tokyo say that Enami Kyoko (67) failed to check her rear view mirror before pulling onto Route 246 in Minami Aoyama on the evening of August 2. She hit a car driven by a 33-year-old Yokohama man that was coming from behind her. Neither driver suffered any injuries.

Meanwhile, Hasegawa Kyoko (32) was stopped in the parking lot of the Samezu driving test center in Tokyo on August 3 when her car was hit by a vehicle driven by a middle-aged woman. Again, neither driver suffered any injuries.

New Addition to Musical Family
Musicians Wakadanna (34) and Minmi (35) became the proud parents of a second baby boy in New York yesterday. Minmi gave birth to their first son in November 2007 and she and Wakadanna, a member of the reggae unit Shonan no Kaze, got married on the same day.