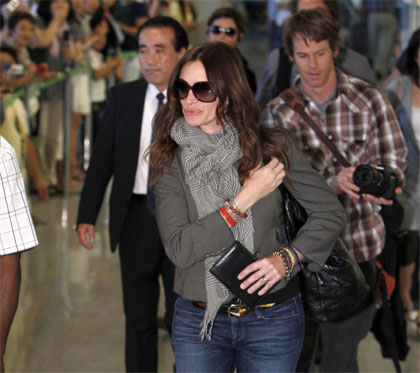 Julia Roberts (42, photo) has been a Hollywood star for two decades, so it came as a surprise to many that when she landed at Narita Airport yesterday, it was her very first time in Japan. She flew in by private jet with her husband, photographer Daniel Moder (41, photo right), and was welcomed at the airport by about 300 fans. She’s in Tokyo to promote her highly anticipated new movie, “Eat, Pray, Love.” Roberts will attend a press conference today and the Japan premiere of the movie at the Roppongi Hills Arena tomorrow night. She is expected to stay in Japan for a few days after that. Directed by Ryan Murphy, the movie opens in Japanese theaters on September 17.

Roberts is said to be the last of the major Hollywood stars to visit Japan, and that led to rumors that she had a dislike for the country. A spokesperson said yesterday, “It was just a matter of the timing never being right. This time, her children are a little bigger and she is the star of the movie, so everything fell into place.” Roberts and Moder have three children, 5-year-old twins and a son (3).

Macchan Gets Back to Work
Comedian Matsumoto Hitoshi (46) is returning to work today after his recent surgery, according to his management at Yoshimoto Creative Agency. One half of the veteran duo Downtown (profile), he has been on medical leave since the end of June and underwent surgery on his left hip joint in late July. Today, he will film an episode of the comedy show “Downtown no Gakinotsukaiya Arahende!!!” that will air on August 22. For the time being, as he is still undergoing rehabilitation, Matsumoto will not do any location shooting or indeed be on his feet for very long.