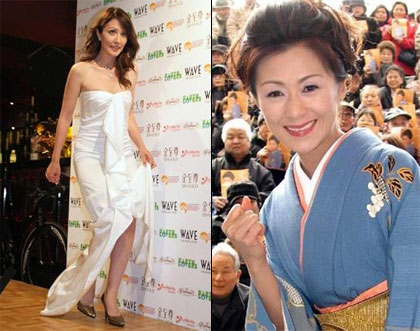 Has talento Yamamoto Mona (34, photo left) finally put her history of romantic scandals behind her? She and the owner of a real estate investment company got married in Tokyo yesterday. According to her management agency, she and her fiance went together to a municipal office and registered their marriage. They don’t currently have plans for a wedding ceremony and Yamamoto is reportedly not pregnant. She attended the Japan premiere of “The A Team” in Tokyo last night but gave no hint of her new marital status.

The couple tied the knot after a relationship of two years and three months, which means there was some overlap with a high-profile scandal that temporarily derailed her showbiz career. In July 2008 Yamamoto was photographed with married Yomiuri Giants baseball star Nioka Tomohiro (34) after leaving a Tokyo gay bar and heading for a love hotel. Though she denied any sexual relationship, she lost all her commercial contracts and was forced to lie low for several months. The media was all the more harsh on Yamamoto because in October 2006 she had been involved in a similar scandal with married national Diet member Hosono Goshi, which led to her being dropped by TBS from the “News 23” show.

Nagayama Yoko an “Arafo Mama”
Enka singer Nagayama Yoko (42, photo right) announced on her blog this morning that she became a mother for the first time yesterday. She and American entrepreneur Mark Smith (41) are the proud parents of a bouncing baby girl. Smith is the president and CEO of temp staffing company Skillhouse Staffing Solutions. Arafo is the Japanese abbreviation of “around forty” and has been popular in the last couple of years when referring to those who marry or have children after reaching that landmark age.