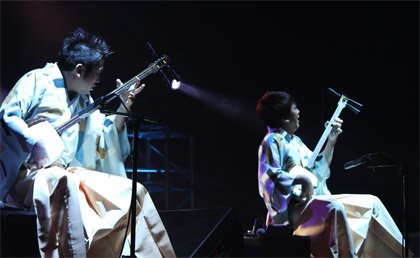 The shamisen duo Yoshida Brothers this week embarked on their latest tour of the United States, starting in New York on Tuesday. The Hokkaido-born brothers Ryoichiro and Kenichi Yoshida played at the Highline Ballroom, after warming up with an earlier sold-out performance at the Otakon convention in Baltimore last weekend (photo).

While commercially still a long way from the sales of mainstream J-pop acts, with their youth and rock sensibilities the Yoshida brothers have brought a whole new audience to the world of Tsugaru shamisen music. They have teamed up with rock and pop artists to create a form a crossover music that is frowned upon by the shamisen elders but goes down well with audiences in Japan and overseas. The duo will be playing seven more shows in the U.S., in Cambridge MA on Thursday, Chicago on Saturday, the San Francisco and L.A. next week. For more details, see the Domo Music Group website. 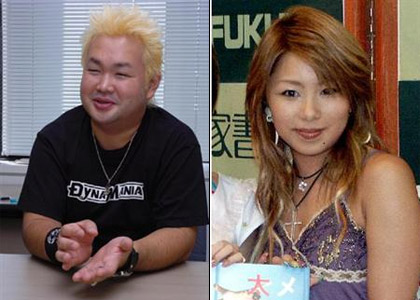 Comedian Hachimitsu Jiro (35) and former aidoru singer Saito Hitomi (28) are maried, the Yoshimoto Creative Agency announced last night. The couple are said to have registered their marriage yesterday but have no plans for a wedding ceremony or reception. The article made a point of saying that Saito is not pregnant. Real name Takano Jiro, Hachimitsu (which translates as Honey) is one half of the Yoshimoto manzai duo Tokyo Dynamite, while Saito was the leader of Hello! Project aidoru group Melon Kinenbi. The group played their last concert in May, and Saito announced her retirement from showbiz. Hachimitsu was a fan of the group, often going to concerts, and he and Saito started dating at the beginning of this year.

Movie Critic Commits Suicide
Movie critic Konno Yuji recently commited suicide at his Tokyo home, according to the Metropolitan Police. He was 66. Konno was found hanging by the neck at his apartment in Daikanyama, where he lived alone. He had been dead for several days. With a background in magazine editing, Konno became a regular guest on the early 1990s late night show “11PM.” He was known for his soft-spoken but unrestrained style.