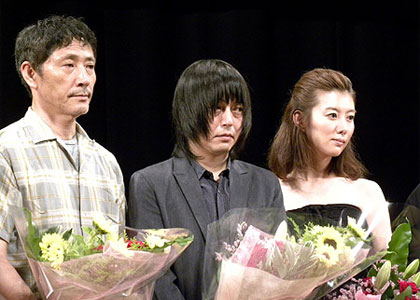 Popular actress Tomosaka Rie (30, photo right) and singer Suneohair (39, photo center) are planning to get married within the year, it was revealed yesterday. The couple have already told friends about their plans, less than a year after they started dating. It would be the second marriage for Tomosaka, who divorced from theatrical producer Kawahara Masahiko (41) at the beginning of 2008 and since has custody of their son (5). Suneohair has previously been married twice to the same woman, with whom he has two children.

Tomosaka made her showbiz debut in a TV commercial for Toyota in 1992. She has gone on to become a regular in TV and movie roles, and won a Golden Arrow best newcomer award for a stage role in 2000. Given name Watanabe Kenji, Suneohair was an independent musician until 2002, when he made his major label debut. He had some stage experience from his college days and first worked on the big screen in 2003. He landed his first starring role in the movie “Aburakusasu no Matsuri,” in which he and Tomosaka played a husband and wife and also performed a duet for the ending theme. Filming started last November and the movie is scheduled to open in the late autumn. Suneohair is also known for contributing the ending theme for the anime adaptation of the popular shojo manga “Honey & Clover.”