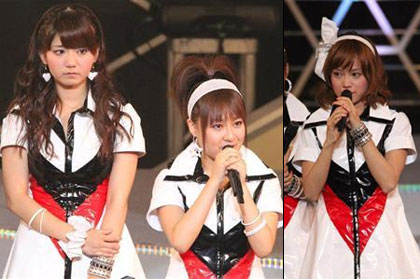 Three members of Morning Musume (profile) are to leave the super aidoru group in the fall. In what is usually referred to as “graduation,” Kamei Eri (21, photo right) and Chinese members JunJun (Li Chun, 22, photo left) and LinLin (Qian Lin, 19, photo center) will perform with the group for the last time during their upcoming nationwide tour. Founder and guru Tsunku (41) said that the 9th round of auditions, the first in four years, will be held to bring fresh blood into the group.

It is the first time that three members will leave the ever-evolving lineup at once. In the case of Kamei, who joined in 2003, it is so that she can undergo treatment for atopic dermatitis. The two Chinese members, who were added in 2007 to help expand the fan base base in Asia, are to undergo preparations to launch singing careers in their home country. 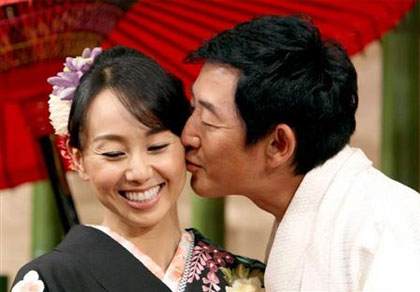 Actor Ishida Junichi (56) and pro golfer Higashio Riko (34) held their wedding reception yesterday in Tokyo. The event, attended by about 350 guests, was held at the Fuji-no-ma ballroom of the Imperial Hotel. Riko was given away by her father, former baseball manager turned commentator Higashio Osamu (60), who said, “I leave everything up to Junichi-kun. I hope they will go through life with a par score.” The event also featured a surprise gift for Riko’s mother – a performance by singer Matsuyama Chiharu (54) of his song “Ozora to Daichi Nonakede.” The happy couple actually tied the knot last December at a ceremony held in the wine country of California. There was no mention in the media of why the reception was held yesterday rather than the originally announced date of July 12.

It is the third marriage for Ishida, a renowned playboy. At a press conference, when asked about the chances of her groom’s infidelity, Higashio joked, “I guess the chances are high. But I’m more concerned with looking after him in his old age!” Actor Ishida Issei (35), Junichi’s son from his first marriage, said it would take him a while to get used to having a mother-in-law who is a year younger than him.