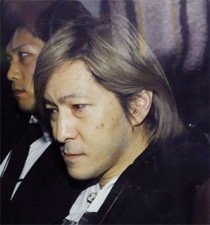 It seems that one of the wealthiest people in the Japanese pop industry just got too greedy. Producer and musician Komuro Tetsuya (49, profile)

was facing arrest this morning in a case involving ¥500 million in fraud. Komuro was taken to the Osaka District Court for questioning last night in the case filed by a Hyogo Prefecture investor (48). In August 2006 the man was approached by Komuro, who said he would sell him the rights to the 806 songs he had written over his hugely successful career for a total of ¥1 billion. Claiming that one of his ex-wives was pressing him for ¥700 million in alimony, Komuro asked for ¥500 million up front. The investor handed over the money, only to discover later that the rights to many of the songs were actually the property of the Avex Entertainment record label. He won a civil case against Komuro, who was ordered to pay the man a settlement of ¥600 million. After he failed to do so by the deadline, the man took the case to the district court.

Komuro looked pale but relaxed as he was taken into custody this morning (photo), though he could be facing up to ten years in prison. Quite a change in lifestyle for the man who was the Golden Child of J-pop in the 1990s. The constant string of hits turned out by Komuro’s group globe and acts he produced, such as Amuro Namie (profile)

and Kahara Tomomi, made him hugely wealthy and helped make Avex a major player in the industry. At the peak of his career, Komuro was said to be making about ¥2 billion a year and his total earnings are estimated to be over ¥10 billion. He had plush homes in Los Angeles and Hawaii, a garage full of sports cars, and was known to book all the first class seats when he flew. Attempts to expand his business empire across Asia in the late 90s were a dismal failure and left him heavily in debt. His lavish, playboy lifestyle also cost him two failed marriages, with the second to singer Yoshida Asami (33) in 2001 lasting just a year and ending with a ¥1-billion alimony settlement. In spite of his financial burdens, he wasted no time splashing out ¥500 million on an extravagant third wedding, to globe vocalist Keiko in 2002.