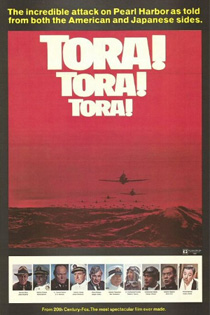 The classic 1970 WWII movie “Tora! Tora! Tora!” is to be released on DVD including scenes cut from the original U.S. release. One of the biggest ever productions of its time, the $120-million movie was a joint Hollywood-Japan project and for the first two years of production it was directed by Kurosawa Akira and Richard Fleischer. After Kurosawa stepped down, the Japanese side was taken over by Fukasaku Kinji, who saw it through to completion. With a cast that included Martin Balsam, Joseph Cotten, Yamamura So and Mihashi Tatsuya, it’s a dramatization of the Japanese attack on Pearl Harbor told from both sides. The title is the code that was used by the Japanese to indicate that they had achieved complete surprise. By coincidence, the Tora of the title is also the name of one of Japanese cinema’s best loved movie characters. So it was fitting that actor Atsumi Kiyoshi, best known for his Tora-san role, had a part in the movie, but his comic scenes with Matsuyama Eitaro were cut from the U.S. release. Though the film was a big hit in Japan, it flopped at the U.S. box office and was slammed by critics like Roger Ebert. Its strength was in the action scenes and its almost perfect documentary accuracy, and over the years it has earned more respect from critics. The new DVD collector’s box set has three disks and includes documentary and behind-the-scenes footage. It goes on sale December 8 for ¥4990.