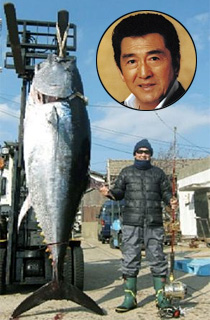 Veteran actor Matsukata Hiroki (66) reeled in a massive tuna at a fishing event over the weekend. The “Hagi Kuromaguro Tournament” takes place annually off the coast of the small island of Mishima, near Hagi City in Yamaguchi Prefecture. Matsukata, who often appears in fishing programs, was a guest participant in the event but he stands a good chance of winning it. It took him about an hour to reel in the monster fish, which weighed at least 300kg (the event’s scales only went as far as 300!) making it about six times bigger than anything he’d ever caught. He often fishes around Hagi but it’s his first time to take part in the annual event, which ends today. Matsukata is a veteran of TV and movies who often plays gangster or authority figures and is best known for the “Jingi Naki Tatakai” yakuza movies and the TV samurai drama “Toyama no Kin-san.”

• The lineup has started to take shape for this year’s “Kohaku Uta Gassen” on NHK. The annual New Year’s Eve song contest has been a TV institution for decades but recent years have seen a steady decline in audience ratings. NHK has tried various new approaches to reverse the decline but is currently trying to focus on the songs and the theme of old fashioned family ties. Emcee’ing the event this year are actress Nakama Yukie (29) and SMAP’s Nakai Masahiro (36). The two were paired for Kohaku in 2006 and more recently worked together portraying a married couple in the movie “Watashi wa Kai ni Naritai,” which is currently in theaters. It will be Nakai’s fifth time as Kohaku emcee, Nakama’s third. Several artists have been named to appear on the show for the first time. The biggest name is the band Mr. Children, who NHK have been courting for years and who finally gave their as-yet informal consent. Definitely making their debut are: African-American enka singer Jero (27), who will realize a lifetime ambition by appearing on the show; actor Mizutani Yutaka (56), who recently resumed his singing career after a 22-year break; popular singer and university student Aoyama Teruma (21); late-blooming singer Akimoto Junko (61), who recently topped the enka charts for three weeks with “Ai no Mama de…”; and the trios Shuuchishin and Pabo, both formed on the quiz show “Hexagon” and known mainly for their exceedingly low IQ’s.