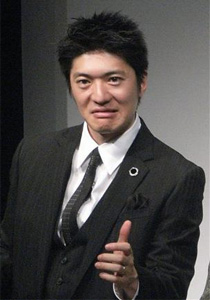 Comedian Nagai Hidekazu (38) has announced his return to Japanese show business. After an unsavory incident allegedly involving an underage prostitute in the Philippines last year, Nagai went to study English in the U.S. with the aim of being able to perform on the international stage. He held a press conference in Tokyo yesterday to announce his return, but what really grabbed the media’s attention was the revelation that he and his wife of nine years, Minako (33), have divorced. He didn’t clarify the exact cause, but his exploits while overseas no doubt had a lot to do with it. While visiting the Philippines in May 2007, Nagai obviously made the most of the nightlife but then found himself detained by local “police.” They accused him of having sex with a 17-year-old girl and demanded that he pay ¥11 million into two Shizuoka prefecture bank accounts to keep the incident under wraps. Nagai paid the money – he later said it was out of panic – but on his return to Japan he denied that he had done anything wrong and sued the banks for the return of the money. That case is still ongoing. Leaving Minako and their now 3-year-old son behind, Nagai headed to the U.S. in September 2007. But just a month later there were media reports of an affair with a Canadian woman (35). When Nagai returned to Japan earlier this month, Minako was waiting with divorce papers, which they have already filed.