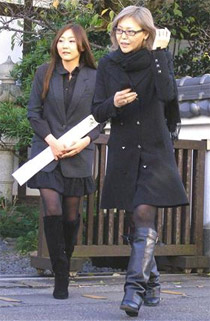 An emaciated and exhausted looking Keiko (36) attended a memorial service for her late father in her hometown of Usuki City yesterday. It was the singer’s first public appearance since the arrest of her husband, music producer Komuro Tetsuya (49), on charges of copyright fraud. She bowed repeatedly in apology to reporters but refused to make any public statement. She and family members attended the Buddhist memorial service to mark the first anniversary of her father’s death, after which the media pursued them from the temple to their home. Keiko’s management agency made a point of releasing a statement yesterday, insisting that the couple had neither divorced nor considered doing so, an attempt to finally squash rumors that have circulated since the arrest.

• Racing jockey Ikezoe Kenichi (29) and Osaka-based talento Hori Akari (22) announced yesterday that they have tied the knot. They said they registered their marriage at a municipal office in Shiga Prefecture on Tuesday. Hori, currently in her senior year at Ritsumeikan University, is a sports presenter in the Kansai region. The pair started dating in April and Hori attended her first ever horse race at the Japanese Oaks in Tokyo in May, a race won by Ikezoe on Tall Poppy. Ikezoe has won over 500 races on the JRA circuit and nine G1 events. Hori is three months pregnant and the couple plan to hold a wedding ceremony in February.

• Singer Misono (24) has denied rumors that she is having an affair with married comedian Shibata Hidetsugu (33) of the duo Untouchable. The two were spotted at an izakaya by the weekly women’s magazine “Josei Seven.” Misono, younger sister of pop star Koda Kumi, insists that they are just friends.