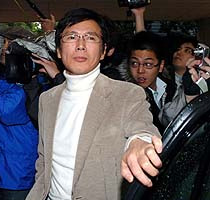 Enka singer Mori Shinichi may yet be able to sing “Ofukuro-san” once again. The song was his signature tune for many years, but a dispute with the man who penned it changed all that last year. Kawauchi Kouhan severely criticized Mori for making changes to the lyrics of the song without his permission. And when Mori reacted as if it was no big deal, the aging Kawauchi had a fit and insisted that Mori would never sing any of his tunes again, asking the JASRAC copyright association to make it legal. Once he realized the corner he was in, Mori tried repeatedly to apologize to Kawauchi, but the writer refused all approaches right up until his death in April. Some seven months later, it seems the dust may have settled. Mori is to give a press conference today, and he is expected to announce that he has persuaded Kawauchi’s family to allow him to sing the song once more. There are still those who insist the old man’s wishes be respected, but it now seems likely that Mori and NHK will milk the situation with his performance at the “Kohaku Uta Gassen” on New Year’s Eve. At least he should stick with the version originally penned by Kawauchi.

• In the ongoing saga and downfall of music producer Komuro Tetsuya (49), it seems that at least his wife Keiko (36) is sticking with him. There were rumors of a divorce between the two following his arrest on Tuesday, with Komuro said to want to protect her as much as possible from legal or financial responsibilities. But in her first public statement, sent to the media by fax, she apologized for the incident and said, “The road ahead of us is very steep, but we are committed to walk it together.” She signed the statement “Komuro Keiko,” a denial of reports that she had filed divorce papers earlier this week.

• Fuji TV and 20th Century Fox are teaming up on a Japanese remake of the Oscar-winning movie “Sideways” (2004). The comedy drama set in California’s wine country was nominated for four Oscars and won the screenplay award. Kohinata Fumiyo (54) will take on the lead role originally played by Paul Giamatti (41), but he and Namase Katsuhisa (48), Suzuki Kyoka (40) and Oscar nominee Kikuchi Rinko (27) are the only Japanese cast members. The movie marks the directorial debut of Cellin Gluck, who has bridged the U.S.-Japan divide for many years in marketing and TV commercials. Shot in California, it is scheduled for release in the autumn of 2009.