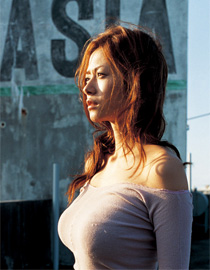 Up and coming actress Maki Yoko (26) announced yesterday that she got married last week. Her husband is described simply as 26 years old and not in show business. The two tied the knot on November 11, an auspicious “taian” day on the traditional calendar. Maki also revealed that she’s pregnant and expecting the baby in the early summer of next year. She said she plans to continue working as long as her condition allows and resume her career after the baby is born. Considered a very versatile actress, she was inspired to take up the craft after watching the Adachi Yumi vehicle “Rex” as an elementary school student. She started acting on the stage in 1999 and made her big screen debut in “Drug” (2001). She had supporting roles in such hits as “Battle Royale II” (2003), “Pacchigi!” (2005), “Juon” (2005), and “The Fast and the Furious 3 – Tokyo Drift” (2006), before making her breakthrough in last year’s Fuji TV drama “SP.” A movie version of the drama is scheduled for release next year. Despite Maki’s impressive resume, media reports never fail to mention her 92cm chest and she has never been shy about showing it.

• Talento and former Morning Musume member Kago Ai (20) revealed on her blog at the weekend that she is suffering from Meniere’s disease. The condition is an inner ear disorder that can affect both hearing and balance, and can cause vertigo and hearing loss.

• Actress Shingyoji Kimie (49) attended a PR event yesterday for the publication of her new memoir, “Mezame” (Wake Up). No doubt she hopes sales of the book will help her troubled financial situation. She married musician Oguchi Hiroshi (57) in 1993, but his failed business led to divorce in 2005 and Shingyoji filed for bankruptcy in 2006. “I used to think I was the most unfortunate person in the world,” she said. “But writing this book has helped me wake up and start a new life.”

• Johnny’s Jimusho idol group Arashi finished their Asia concert tour with two shows in Shanghai over the weekend. It was the first show by a Johnny’s group in China, where their CDs are not on sale. But thanks to the Internet (and more than 1,000 visiting Japanese fans) the two 11,000-seat shows were sold out. The tour, which marks the group’s 10th anniversary, also took in Tokyo, Taipei and Seoul.