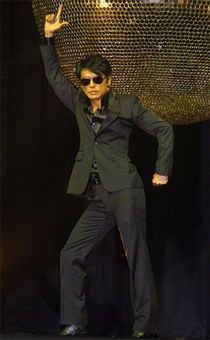 Actor Takahashi Katsunori (43) was more than happy to strike a disco pose for reporters yesterday. The occasion was a post-production event for the big-screen adaptation of his popular TV Asahi late-night drama series “Tokumei Kakaricho – Tadano Hitoshi,” held at the Differ Ariake hall in Tokyo. The venue, which houses the first ever arena purpose built for mixed martial arts, was also home to a famous bubble-era disco. Yesterday Takahashi posed for the cameras under the giant mirror ball that still hangs from the ceiling. The TV series, which has run since 2003, is adapted from a serial manga in the Gendai Shukan magazine. The Tadano Hitoshi character, whose talents are sex and karate, works as a fixer at an ad agency run by a yakuza. The drama is known for its love scenes (it has often featured porno actresses) and putting out for the movie version is doctor-turned-talento Nishikawa Ayako (37), who said yesterday with her usual confidence, “Of all his bed scenes, I was the best.” Also at the event were DJ Ozma, who recorded the movie’s theme song “Masurao,” giant Korean kickboxer Choi Hong Man (28), and actressese Ebihara Yuri and Takizawa Saori (27). Asked for a comment on rumors of her romance with actor Watanabe Kunito (24), Takizawa insisted that they are just good friends. Directed by Ueda Hisashi, the movie is scheduled to open on December 6.

• Every Little Thing vocalist Mochida Kaori (30) is to make her debut as a solo artist. She opened a new official website yesterday and announced that she would release her first solo single on January 28, though she didn’t give a title. She says she looks forward to seeing what kind of music and encounters will come with the new direction, adding that she plans to continue performing as part of ELT.