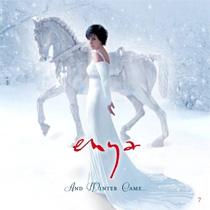 The full lineup for this year’s “Kohaku Uta Gassen” was announced yesterday. The number of artists has been reduced from last year’s 58 to 53, the lowest number in the last ten years. The lineup features 14 names that are new to NHK’s annual New Year’s Eve song contest (see yesterday’s story). Irish singer Enya (47) is to be the first western artist to appear on the show since Andy Williams and Sarah Brightman back in 1991. Enya will perform as part of the environmentally themed “your-antibiotics.com” section of the show, along with singer and former vocalist of rock band The Boom, Miyazawa Kazufumi (42). For every chaku-uta download of “Trains And Winter Rains”, Enya’s first studio single accompanying her new album “And Winter Came,” the Mottainai environmental group has agreed to plant a tree. Big names such as Southern All Stars front man Kuwata Keisuke (profile), Takeuchi Mariya and rock giants B’z (profile) all turned NHK down but Mr. Children have been officially confirmed for the show after 15 years of persuasion by NHK. The group recorded the network’s theme song for this summer’s Beijing Olympics. Kohaku will also feature its youngest ever artist, the 9-year-old Ohashi Nozomi. She and duo Fujioka Fujimaki had a hit this summer with the theme to the anime movie “Gake no ue no Ponyo.” But Fujimaki Naoya (56) has said that health problems meant that his partner Fujioka Takaaki (56) was unlikely to appear on Kohaku.

• British actor Daniel Craig (40) and other cast member of the latest James Bond movie were in Tokyo yesterday to promote “Quantum of Solace.” Craig, Ukrainian Bond girl Olga Kurylenko (29) and Swiss-German director Marc Forster held a press conference to talk about the movie, which opens here on January 24.

• A newly released DVD which features a bikini beauty on a beach and in other locations around the city of Hachinohe in northern Japan has entered the Oricon weekly rankings at No.41. Nothing unusual about that except for the fact that “Love Navi Hachinohe” features Fujikawa Yuri (28), a member of the Aomori prefectural government. The DVD is the third-highest ever new entry in the chart by a female idol.

• Talento Wakatsuki Chinatsu (24) has reopened her popular blog. It was the most popular celebrity blog in Japan for nine straight months until she closed it down last New Year’s Eve. It is hosted on the same Ameba service as the blog of actor Kamiji Yusuke (29), which was recognized by the Guinness Book of World Records as the most popular in the world. That blog has recorded more than 13 million pageviews in a single day.