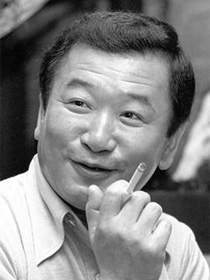 Singer Frank Nagai died recently of lung cancer at his home in Tokyo, it was revealed yesterday. He was 76. He had not appeared on stage since a failed suicide attempt in 1985 left him with brain damage that affected his speech and memory. Real name Nagai Kiyoto, he became a top star in the late 1950s with his hit “Yurakucho de Aimashou.” The song was the theme for the Sogo department store, which was located in the Yurakucho district of Tokyo. In 1959 he and the late Matsuo Kazuko (1935-92) had a hit with the duet “Tokyo Night Club.” His signature was a deep voice that was ideally suited to the moody ballads he mainly sang throughout the postwar Showa era. Though he and his wife Shizuko were known as a close couple, it was a relationship with a mistress that led to Nagai’s suicide attempt. And several years later, stressed by caring for her husband and family squabbles over his inheritance led her to also attempt suicide. The couple divorced the following year and Nagai was looked after by his sister.

• Singer and actor Shimizu Kentaro (56) was arrested for the fifth time last week. Tokyo Metropolitan Police said that he had been involved in a hit and run in Asakusa on the evening of October 27 when his car hit a cyclist as he was making a left turn. When he turned himself in three days later, Shimizu said a friend had advised him to do so before police figured out who they were looking for. He was arrested twice in the 1980s for marijuana possession and again in 1994 and 2004 for amphetamine use, and has served prison time. Best known for his lead role in a long-running series of yakuza flicks, Shimizu had only this year announced his return to work after his last arrest.

• Female pop duo Kiroro played their last concert for the foreseeable future yesterday. The duo, pianist Kinjou Ayano (31) and vocalist Tamashiro Chiharu (31), performed at a festival in Yomitanson in their home prefecture of Okinawa. The short set included their upcoming new single “Shiawase no Tane – Winter Version,” which goes on sale December 3. Kinjou is seven months pregnant with her second child and the duo will do a few TV appearances before taking an extended break.