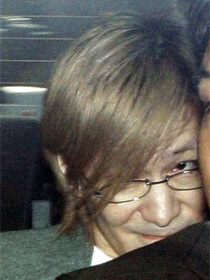 More details continue to emerge following the arrest of music producer Komuro Tetsuya (49) yesterday by the special investigation department of Osaka District Court. It seems that Komuro tried repeatedly to sell the copyrights to more than 800 songs and was looking for ¥1.8 billion. He was turned down by several potential buyers, including a major advertising firm, before agreeing to a deal for ¥1 billion with an individual investor. Having already handed over half the money, the investor realized it was a scam as Komuro had already transferred the rights to the Avex Entertainment record label. It was revealed yesterday that Komuro had used ¥300 million of the money to repay loan sharks. The investor won a ¥600-million court settlement against Komuro, whose failure to pay up ultimately led to his arrest. Also arrested were Kimura Takashi (56) and Hirane Akihiko (45), both executives from Komuro’s company Tribal Kicks. The company sponsors the Oita Trinita J-League soccer team, but has had trouble paying its annual ¥70 million sponsorship money since 2005. And it was revealed that Komuro and his wife, Globe vocalist Keiko (36), have been living separately for the last several months. She had increasingly been spending time at her family home in Oita Prefecture. Her mother runs the upscale Ryotei Yamadaya restaurant in Usuki city, while her sister is the owner of the Usuki Fugu Yamadaya restaurant in Tokyo.

In a related development, a spokesman for the music production and concert planning company eMusic said that they were considering a lawsuit against Komuro for a similar scam. The company signed a one-year contract with him for original recordings in August 2007, but he made a deal for ¥30 million for the same recordings with another company in January. The three met in February and Komuro agreed to repay the ¥30 million, though essentially the money came from eMusic. The eMusic spokesman said the deal had lost the company more than ¥10 million a month in total.

Meanwhile, Avex announced that they have canceled the release of two new Globe singles this year. “Get Wild” and “Self Control” are covers of hits by TM Network, the trio with which Komuro launched his career in the early 1990s. And Sony Music Entertainment has also canceled plans to release an album of TM Network singles, which was to go on sale later this month.

• Freelance announcer Tsushima Ayuko (32) wrote on her blog yesterday that she and a 34-year-old company employee tied the knot on Monday. She said they first met last December and had already decided back in March to get married. Tsushima is a presenter on the TBS “Sunday Morning” show.

Komuro Tetsuya Faces Arrest For Fraud
The Return of Ofukuro-san?