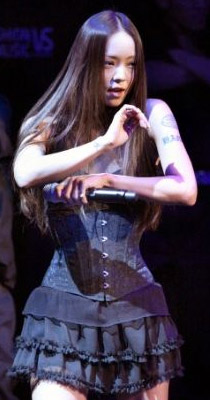 90s pop darling Amuro Namie (30) is trawling through hits of the past for her new CD. She is covering or sampling one song each from the 1960s, 70s and 80s for the as yet untitled release. She performed two of the songs yesterday at a PR event for a top hair care brand: “New Look” is a cover of the Supremes hit “Baby Love” from 1964; and “Rock Steady” is a dance number that samples Aretha Franklin’s 1971 hit. The third song, “What a Feeling”, is still in production and is based on Irene Cara’s hit from the 1983 hit movie “Flashdance”. Amuro worked with top stylists Patricia Field (The Devil Wears Prada, Sex & the City) and Orlando Pita (Madonna, Julia Roberts) in making the promo video for the “Premium Vidal Sassoon” brand. Though past her heyday as an industry trend-setter, Amuro has kept her career on an even keel through a decade of marriage, motherhood and divorce. She is on a 64-show national concert tour until February 27 and the new CD is due for release on March 12.

• Popular former Fuji TV announcer Chino Shio (30) revealed yesterday that she is four months pregnant and expecting twins. Known by her nickname “Chinopan”, she worked for Fuji TV from 2000 till the end of 2005. She married the grandson of former prime minister Fukuda Takeo (1905-95) in April 2006 and now works as a freelance announcer and talento.