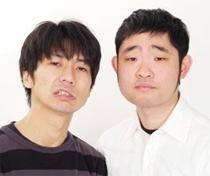 Comedian Takahashi Kenichi (photo left, 36) is back at work, according to a statement from his management agency. Arrested last July for molesting a high school girl on a crowded Tokyo subway train, the case was closed at the end of December without any prosecution. One half of the manzai duo King of Comedy, he denied the charges from the start but submitted to “jishuku”, the Japanese custom of apology followed by reclusion when caught misbehaving.

&$149; Impersonator Ishiyama Tatsuhiro (42) is locked in a legal battle with rock star Yazawa Eikichi (58), whose fame he makes his living from. Ishiyama was sued by Yazawa to the tune of ¥10 million for using his name. But after reviewing the documents with a lawyer, he has decided to counter-sue. He’s to give a press conference today to explain the case.

&$149; Folk duo Kobukuro are really riding on a wave of popularity these days. They recently took the award for last year’s best record at the Japan Record Awards with “Tsubomi”. And their 2006 album “All Singles Best” continues to see brisk sales. Having topped the 2.7 million sales mark, it’s overtaken Chage & Aska’s 1992 release “Super Best 2” as the best-selling album ever by a Japanese duo.

&$149; TV Asahi announcer Nomura Maki (32) revealed on the network’s website yesterday that she is seven months pregnant with her first child. She married an advertising company employee in 2004.