It seems that The Police have little faith in the charitable nature of Japanese people. With the British rock trio playing their first shows in this country since 1981, demand for tickets is sure to be as huge as it has been on the American and European legs of their world tour. While those shows brought in over $130 million in ticket sales, four front row seats for each of the 100 shows were auctioned off and the proceeds given to charity. Buyers got to meet the band and received signed instruments. The tickets sold for about ¥600,000 apiece and that money went to Water Aid, which helps provide safe water supplies in developing countries. For each of their February shows there will be two pairs of charity tickets, with ticket holders receiving goods such as a signed tour brochure and a visit to the band’s dressing room. But rather than by auction, the tickets will be sold (by lottery if there is demand) at a fixed price of ¥550,000 per pair. Asked why the price was set at half of what buyers were prepared to bid by auction in other countries, local organizers said that fake auction bids tend to be a problem in Japan and that the fixed price was decided by the band and their management. Vocalist Sting (56) has in the past canceled an endorsement contract with a Japanese company due to their poor environmental record. Still, the ¥275,000 price per person is a record for a Japanese concert ticket and more than four times the ¥65,000 that fans paid to see The Rolling Stones in 2006. Anyone wanting to apply for tickets needs to send a postcard to Ticket Pia by January 21. The Police play Osaka’s Kyocera Dome on February 10 and Tokyo Dome on February 13 & 14. 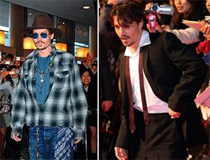 More than 2,500 fans turned out to see Johnny Depp (44) in central Tokyo last night. The Hollywood superstar originally planned to arrive for his fifth visit to Japan on Monday. But he landed at Narita Airport yesterday afternoon, and just hours later was at the Roppongi Hills complex for the local premiere of “Sweeney Todd” along with director Tim Burton (49). Depp was in a plaid shirt, jeans, sunglasses and hat on arrival at Narita, and changed into a black suit for the evening event. He leaves Japan for London after this morning’s press conference. In addition to the premiere, his intense schedule packed 16 media meetings into a brief 30-hour stay.

• Talento Sakashita Chiriko (31) announced yesterday that she is to get married today. In a fax sent to the media, she said that her fiancee is not in showbiz and so she wouldn’t give his name or personal details. Sources say he is a 29-year-old cameraman working for a TV production company. The two were photographed on a date back by one of the weekly magazines back in 2004. They chose today, his 29th birthday, to register their marriage. They don’t currently have plans for a wedding ceremony.

• Also engaged is former TBS announcer Yamamoto Fumio, and at 73, he is thought to be the oldest celebrity ever to get married. His fiancee is a 43-year-old divorcee and mother of two. Yamamoto, whose wife of 34 years died in 1995, was emcee for her wedding 14 years ago and the two met again last year.