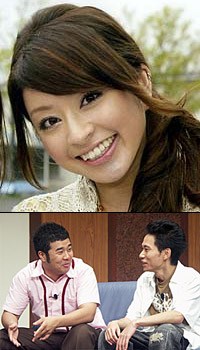 It seems the dream is over for Yoshimoto comedian Tsutsumishita Atsushi (30). When we reported last year on his romance with fashion model Tokita Reiko (23), they were referred to as Beauty and the Beast! But it seems that a fairy tale ending just wasn’t to be: Tokita revealed on her blog this week that they have split up after having grown apart. The couple met on the Akashiya Sanma-hosted show, “Odoru! Sanma Goten” variety show in October 2006, with Tokita telling the chubby Impulse member on air that she was a big fan. Sanma got them to exchange telephone numbers and an unlikely romance was born. Impulse, with Itakura Shunsuke as the boke, made their debut in 1998. Tokita made her debut in the teen magazine “Cawaii!” while she was in high school and is a regular cover girl for “JJ”.

• Winners of the annual Blue Ribbon Awards were announced yesterday. Second only to the Japan Academy Awards, the winners are chosen by film journalists from the country’s major newspapers. This year’s winners are:

• On the international front, “Mongol”, directed by Sergei Bodrov and starring the versatile Asano Tadanobu (34), has been nominated for a Best Foreign Film Oscar. It’s being reported as the first Academy Award nomination for Kazakhstan, though the countries behind the production also include Russia, China and Mongolia. The movie is based on the early days of the great Mongolian warrior Genghis Khan, played by “Ichi the Killer” star Asano.