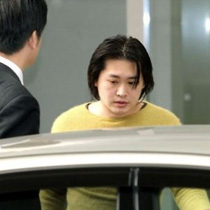 The case against singer Takahashi Yuya (28) on drug charges began yesterday at the Tokyo District Court. The second son of actress Mita Yoshiko (66), he was arrested in the capital in mid-November. After getting high in a convenience store toilet, he was found with 0.1g of amphetamines in his possession when stopped by police. It is his third drug arrest and he has confessed to the charges, so it is likely that this time he will receive a prison sentence along the lines of the two years that prosecutors are seeking. After his first two arrests, the first dating back to when he was 18, Mita took responsibility and gave up work and lucrative commercial contracts. But she says she has now reached the limit of what she can do as a parent and has left the responsibility to his father.

• Bad news yet again for NHK. A day after the public broadcaster’s chairman offered to resign, another minor scandal hit the news. A film crew replaced the number plates on several parked cars on Sunday while filming a drama in Chiba Prefecture. The Okayama Prefecture plates were used to create authenticity for the the drama’s location. But when the crew went to remove the plates, they found one of the cars had been driven away. Driving with the wrong plates is a traffic offense. Meanwhile, just days before his term as chairman was due to end, Hashimoto Genichi offered to resign on Monday along with two managing directors over a case involving employee insider trading. The scandal erupted last week when it was revealed that three NHK employees bought shares in a restaurant operator minutes before the network ran a story about the company. At the weekend, NHK promised an investigation involving thousands of employees with access to the information.

• Oda Kazumasa’s “Jiko Besuto” is the first album ever to stay on the Oricon charts for 300 consecutive weeks. Oda (60), who holds several records for the oldest artist on the charts, released the greatest hits compilation in April 2002 and it entered the chart at No.1. It currently sits at No.28. Meanwhile on top of the singles chart is five-member Korean vocal group Dong Bang Shin Gi (known in Japan as Touhou Shinki) with “Purple Line”. They are the first non-Japanese Asian artists to top the chart.

• Former top idol singer Hori Chiemi (40) said on her blog yesterday that she broke a rib last week in a fall at her home.

• Aromatherapist and former Fuji TV announcer Ohashi Maki (31) revealed on her blog yesterday that she gave birth to a baby girl on January 13. Ohashi quit Fuji in 2001 and married an employee of major advertising firm Dentsu in 2002.