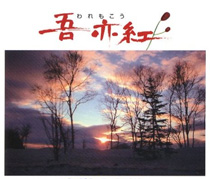 Call it the “Kohaku Bounce”. The latest weekly singles chart ranking from Oricon shows that exposure on NHK’s annual New Year’s Eve song spectacular does wonders for sales. It’s no surprise to see superstars SMAP enjoying their third week at No.1 with “Dangan Fighter”, the live performance of which drew the peak audience rating of 43.9% on Kohaku. But for the first time in Oricon’s 40-year history, the No.2 and No.3 spots are also “Kohaku songs”. In second spot is the enka ballad “Waremokou” (cover above) by Sugimoto Masato (58), a successful songwriter but almost totally unknown as a singer until last month. The single was released in February 2007 and never really made an impact on the chart until Sugimoto performed on Kohaku. He’s followed at No.3 by Akikawa Masafumi (40), whose “Sen no Kaze ni Natte” enjoyed a similar boost last year. It went on to became last year’s biggest-selling single, and the first ever million-selling classical single, after the opera tenor appeared on Kohaku at the end of 2006. The jump back up the charts proves that, in spite of its continually declining audience, an appearance on Kohaku can still make a career. (By the way, waremokou is the name of a wild flower, known in English as a burnet)