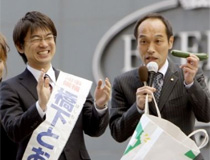 Family lawyer and TV personality Hashimoto Toru (38, photo left) became Japan’s youngest-ever governor when he won a landslide victory in Osaka on Sunday. Supported by the governing – but troubled – Liberal Democratic Party, he campaigned with the message that he wanted to bring the smiles back to the faces of Japan’s second city. Like fellow celebrity turned Miyazaki prefectural governor Higashikokubaru Hideo (50, photo right), who stumped for him on Saturday, he will no doubt make the most of his non-political background and try to shine a spotlight on slush funds and other financial problems. After the results were in, he was in practical mode, saying that his major challenge is to eliminate debt issues by the prefectural government. Hashimoto, the father of seven children, has been a regular face on the variety show circuit in the last couple of years.

• Singer Takahashi Yuya (28) was handed an 18-month prison sentence at the Tokyo District Court yesterday. He will however be allowed to continue hospital treatment for depression and drug addiction, after having paid ¥6 million in bail. The son of top actress Mita Yoshiko (66), he was arrested back in November for drug possession and use, his third such arrest.

• Rock legend Jimmy Page (64) attended a PR event in Tokyo yesterday for the new Led Zeppelin hits album “Mothership” and a re-release of the live album “The Song Remains the Same”. Asked to comment on speculation of an upcoming world tour following last year’s hugely successful reunion concert in London, Page said, “Robert Plant also had a parallel project running and he’s really busy with that project, certainly until September, so I can’t give you any news.” When asked what he thought of actress Sawajiri Erika, a Zeppelin fan who flew to London for the concert, he simply said “Unfortunately, I don’t know her.” But his reply was interpreted as “Betsu ni…”, echoing Sawajiri’s famous grumpy line and drawing roars of laughter from the assembled fans and media. A bemused Page said, “Judging from this reaction, maybe I should have met the lady!”

• Actress Kawakami Maiko (41) is romantically involved with younger actor Takasugi Mizuho (29), according to today’s issue of women’s magazine “Josei Jishin”. A somewhat drunken Kawakami was spotted bringing Takasugi back to her Tokyo apartment after a New Year’s party earlier in the month.