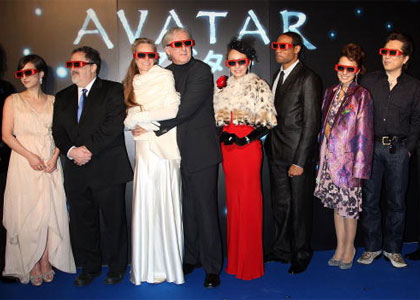 Revenue figures released this week show that the movie industry had a record year in 2010. The annual report from the Motion Picture Producers Association of Japan, commonly known by the Japanese abbreviation of Eiren, said that the box office total for the year was ¥220.7 billion, up 7.1% from 2009. Thanks largely to the increased revenue and publicity generated by such 3D hits as “Avatar,” the total was the highest ever, beating the previous record of ¥210.9 billion in 2004. The total number of moviegoers was 174 million, the highest figure since 1975.

Though the number of domestic movies was down by almost 10% from 2009, local productions had another strong year, grossing more than imports for the third year running. But it was the Hollywood 3D blockbusters and their higher ticket prices that had the highest individual box office traction, with “Avatar” grossing ¥15.6 billion, “Alice in Wonderland” at ¥11.8 billion, and “Toy Story 3” with ¥10.8 billion. The biggest homegrown box office success was, once again, a Studio Ghibli anime feature. “Karigurashi no Arrietty” (The Borrower Arrietty) grossed ¥9.25 billion.