The world of manzai comedy has lost one of its pioneers. Kimi Koishi died yesterday of lung cancer. He was 83. According to his management agency, he became ill in January 2010 and spent the last year in and out of hospital, from where he appeared by satellite link on an NHK show last December.

Real name Shinohara Isao, he was just 12 when he formed a “young manzai” comedy duo with his elder brother in 1940. As they matured, and calling themselves Yumeji Itoshi – Kimi Koishi, they went on to become the role models for just about every manzai artist since, in particular the “kamigata manzai” of Osaka and the surrounding region. From 1963-75, they hosted a popular game show on what would later become the TV Asahi network. In 1993, they became the first manzai act to be awarded the Medal with Purple Ribbon, given by the government for contributions to culture and the arts. The elder brother passed away in 2003, and apart from a one-off collaboration with Nishikawa Kiyoshi (64), Itoshi never performed manzai again. 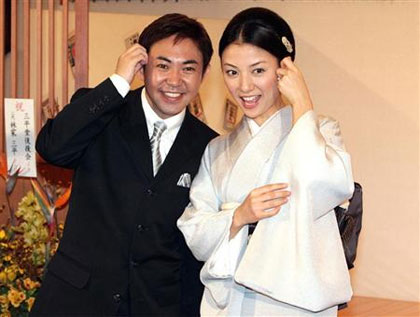 Popular rakugo-ka Hayashiya Sanpei (40) and actress Kokubu Sachiko (34) held a joint press conference yesterday to announce their engagement. The traditional comic storyteller said he first met Kokubu just last November in Kyoto when she appeared as a special guest on the TBS historical drama series “Mito Komon.” He went straight into pursuit, calling her up until she agreed to go out with him. They held their formal engagement ceremony at a Tokyo hotel on Friday, will register their marriage in March, and plan to hold a wedding ceremony in October.

Though she will take on a particular set of duties and expectations as the wife of a traditional performer, Kokubu plans to also continue her acting career. Hayashiya’s mother, essayist Ebina Kayoko (77) gave her seal of approval yesterday, describing her future daughter-in-law as “very kind-hearted.” She also made the predictable request that Kokubu ensure that there will be a second and third generation heirs to the family line.

Real name Ebina Taisuke, Hayashiya entered the world of rakugo as a university student using the stage name Ippei. The the youngest son of a renowned rakugo-ka, he succeeded to his late father’s stage name in March 2009. Kokubu was scouted as a model for the fashion magazine “CanCam” at the age of 18. She joined the crew of the TBS variety show “Wonderful” in 1998. The show is still running and it was presenter Azuma Mikihisa (41) who set up the first dinner date between her and Hayashiya.