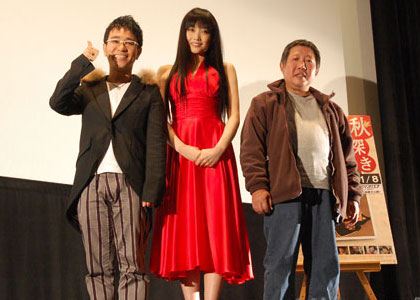 The body of a man believed to be movie director Ikeda Toshiharu (59, photo right) was found in the Pacific Ocean at the end of last year, it was revealed yesterday. Mie Prefectural police have reported that the body, a short man in his 50s or 60s, was found floating near a lighthouse on the southern Shima Peninsula on December 26. The body was naked apart from a par of black sneakers and the man was believed to have drowned one or two days earlier. The area is remote, although its beaches are popular in summer.

Police are not assuming foul play and think it likely that the man jumped, or fell, from the 20m cliffs near the lighthouse. An associate of Ikeda who lives in the nearby small city of Shima heard about the death and suggested a possible identity to police. They are currently carrying out DNA testing, but the body has already been cremated.

Ikeda became an assistant director for Ishihara Promotions while studying at Waseda University and joined the Nikkatsu movie studio after graduation. He joined at the same time as Negishi Kichitaro (60), with whom he left Nikkatsu in 1984 to set up Director’s Company. Their first project was “Ningyo Densetsu,” and their approach of giving directors full creative control over movie projects shook up the industry. Ikeda left the company in 1991. His recent films include “Hasami Otoko” (2005) and “Akifukaki” (2008, photo).