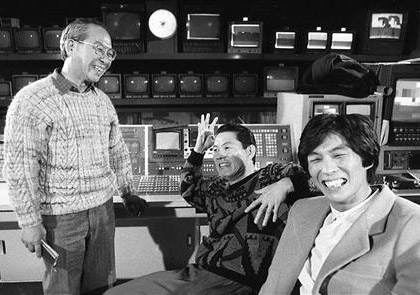 Yokozawa Takeshi (photo left), the man who created some of Japan’s best-loved comedy shows, died yesterday at a Tokyo hospital of pneumonia. He was 73. A native of Gunma Prefecture, he joined Fuji TV in 1962 after graduating from the prestigious Tokyo University. He worked in a variety of divisions before moving to TV production in 1974. In 1980, he was a leading force behind the show “The Manzai,” which led to a boom in the double act form of standup comedy that remains so prevalent to this day. He later went on to produce two legendary shows – “Oretachi Hyokinzoku,” which made superstars of Kitano “Beat” Takeshi (63, photo center, profile) and Akashiya Sanma (55, photo right, profile), and “Waratte Iitomo,” the vehicle for the comedy and hosting talents of Tamori (65, profile) which has been on the air every weekday afternoon for 28 years.

In 1990 Yokozawa also took on the post of president of Virgin Japan, and he quit Fuji TV in 1995 to become president of the Tokyo branch of Yoshimoto Kogyo (profile), the major talent agency that represents most of the top comedy acts in Japan. He also worked as a professor at Kamakura Womens University and as a media commentator.