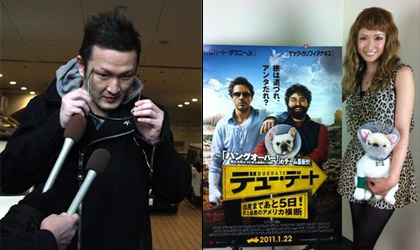 Kabuki star Nakamura Shido (38, photo left) may be on the verge of getting married again. Today’s issue of weekly magazine “Friday” includes a report on the actor and his girlfriend recently buying an engagement ring together. Reporters confronted Nakamura last night after a performance in Tokyo and he took the time to acknowledge his new relationship, removing his sunglasses for that extra bit of sincerity. The new love in his life is described as a 27-year-old “office lady,” who is a graduate of the prestigious Waseda University and has appeared as a model in fashion magazines. The couple, who are said to have met at a party last summer, are living together at Nakamura’s apartment in the Pacific Ocean town of Shonan, Kanagawa Prefecture.

After his February 2008 divorce from actress Takeuchi Yuko (30, with whom he has a 5-year-old son, Nakamura was romantically linked with a younger actress bombshell, Kuroki Meisa (22). He is currently appearing at Le Theatre Ginza, in a production that replaced the scheduled show starring troubled fellow kabuki “prince” Ichikawa Ebizo (33).

Welcome Back, Mrs. Darvish
In what’s most likely an attempt to get her career back on track before she ends up as the ex-Mrs. Darvish, talento Saeko (24, photo right) has filmed her first professional TV appearance in more than three years. Yesterday she did the PR for her role as “navigator” for the upcoming airing of Hollywood comedy flop “Due Date” on the CS Movie+ cable/satellite channel. The wife of Darvish Yu (24), the highest-paid player in Japanese baseball, hasn’t worked on TV since their November 2007 shotgun marriage, though she has appeared in magazines and done some fashion promotion.

The couple have two young sons but are currently in divorce negotiations. And the financial pie they’d be slicing up recently became much bigger. Earlier this month it was announced that the Nippon Ham Fighters star pitcher had received a hefty pay raise and will receive a whopping ¥500 million for the 2011 season. But the couple’s marital problems date back to last year, when the media speculated about rumors of his extramarital affairs and disagreements over their finances.