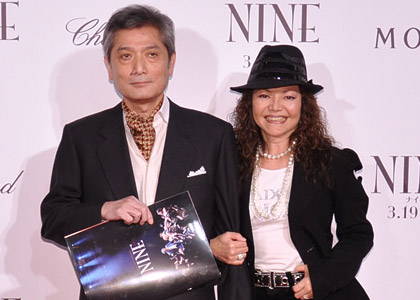 Multi-talented actor Hosokawa Toshiyuki died on Friday after injuring his head in a fall earlier in the week at his home in Tokyo. He was 70. Known for his cool image and for taking his craft very seriously, Hosokawa was a popular supporting actor on stage and TV and in movies. He is survived by a daughter from his failed marriage to actress Ogawa Mayumi (71). In 1974, he got remarried to former Takarazuka actress Fujimoto Norie.

A native of Fukuoka Prefecture, Hosokawa dropped out a student at Gakushuin University in 1964 to join the Bungakuza theatrical troupe. His best known stage success was the musical “Show Girl,” in which he co-starred with actress Kinomi Nana (64, photo right) for a 15-year run. Hosokawa’s popular screen roles include the hit 1994 NTV drama series “Ienakiko,” alongside child prodigy Adachi Yumi (29), and the 1997 comedy movie “Rajio no Jikan” (Welcome Back, Mr. McDonald). He also worked as a radio disc jockey and as a professor at Osaka University of Arts.