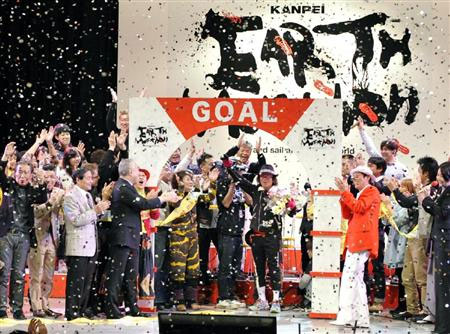 Japan Zone takes its hat off to Hazama Kanpei (61), who yesterday completed his mammoth Earth Marathon. The Yoshimoto Kogyo comedian ran and sailed around the entire globe, more than 41,000km in all, over the course of 766 days, and finally crossed the finish line at the Nanba Grand Kagetsu theater. The arrival was televised live and his family and Yoshimoto colleagues – many in tears – were on hand to welcome him. Along the way, Hazama learned that he had been diagnosed with cancer, in what he yesterday described as the most difficult part of his journey. Asked who he would like to dedicate his feat to, he gave the name of musician Iwamano Kiyoshiro, who wrote the theme song for the Earth Marathon but passed away in May 2009, just months after it began. 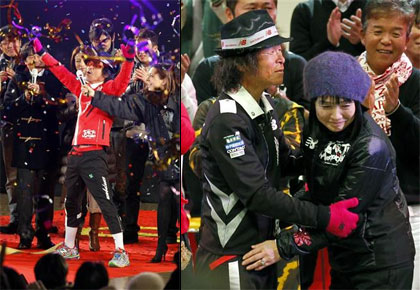 Hazama, already an experienced endurance athlete, came up with the idea for the Earth Marathon in 2006. He joked at the time that he was going to live as long as it took to complete it. When that joke came back to haunt him and he learned of the cancer a year ago, he said “If I’m going to die, I want to die running!” The following April he traveled to the US with his wife Mitsuyo (53) to undergo radiation therapy. Yesterday, he thanked her profusely for her immense support throughout the journey – she traveled eight times in all to meet him in various parts of the world.

Read more on Japan Zone about this amazing feat