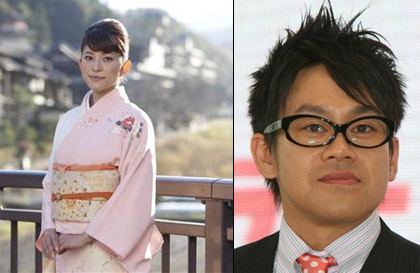 Uehara Takako (28, photo left), a member of the J-pop group Speed, has landed her first movie starring role. Though she has appeared on the big screen, with and without her fellow group mates, her role in “Koi Tanibashi – La Vallee de L’Amour” marks a significant change for her. She plays an employee at a Tokyo design firm who returns to her family’s country home after being laid off. Back in the onsen (hot spring resort) town of Misasa in Tottori Prefecture, she dons a kimono to take over the role of “okami” or proprietress of the family inn. During the 3-week location shoot, she had to carry out one local tradition – paying homage at the Nageiredo temple, precariously perched on the 900m cliffs overlooking the town.

Uehara had her first movie role with Speed in 1998, her solo debut was the main supporting role in 1999’s “Dreammaker,” for which she won a Best Newcomer prize at the Japan Academy Awards. She has had a handful of dramatic and narration movie roles since. TV drama parts have been more plentiful and she has also appeared in a couple of stage productions.

Miyagawa Daisuke a Dad At Last
Popular comedian Miyagawa Daisuke (38, photo right) has finally become a father. Married for 13 years, he announced yesterday that his wife gave birth to a baby boy back on December 2. The late announcement was due to the fact that the baby was born premature and Miyagawa waited until he was released from hospital.