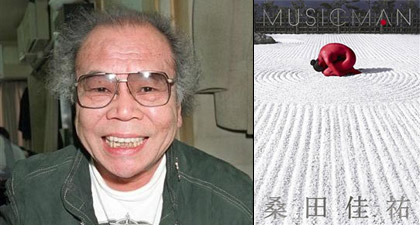 Renowned producer and director Wada Ben died of esophageal cancer at an old people’s home in Kawasaki yesterday. He was 80. Known for his hearty laugh, which earned him the nickname “Gahaha no Ojisan,” the Mie Prefecture native joined NHK in 1953 after graduating from Waseda University. He became one of the network’s most successful directors, working on such popular taiga historical drama series as “Ryoma ga Yuku” (1968), “Amagigoe” (1978), and “Ashura no Gotoku” (1979).

Wada’s work was frequently recognized at festivals, to the extent that he was referred to as the “Arts Festival Man.” He retired from NHK in 1987, and went on to make such movies as “Harimao” and the first of the “Kanzen Shiiku” (Perfect Education) series in 2001.

Kuwata Keisuke to Release Solo Album
And speaking of stars battling with esophageal cancer, Southern All Stars vocalist Kuwata Keisuke (54) gave the first glimpse of his upcoming solo album, his first since announcing his cancer last summer. “Music Man” is scheduled for release on February 23 and is being touted as his “kaiki iwai,” or celebrating recovery from illness. The first run of the CD will include a 104-page book and a DVD documenting the recording of the album. The DVD will also include music promo videos for the first time in Kuwata’s career, including his 35 years with SAS.