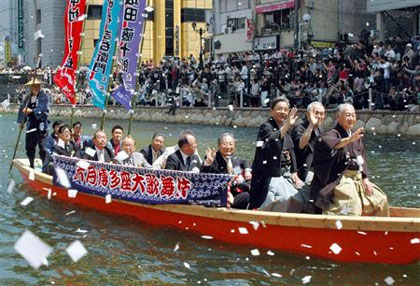 Thousands of residents of Fukuoka turned out yesterday to watch some veteran kabuki stars take to the Hakata River in what has become an annual ritual. Sakata Toujuro IV (78) and other cast members of the upcoming production at the Hakata-za theater were fortunate enough to have beautiful spring weather as they sailed down the river in 10 small boats. Some 40,000 fans ans passersby cheered from the banks and bridges across the river, which runs through Fukuoka. The kabuki production starts from June 2.

Stardust Revue Make Guinness Book
The rock band Stardust Revue have been recognized by the Guinness Book of World Records. In 2001, the band performed 101 songs at a folk festival in Tsumagoi, Shizuoka Prefecture, in sweltering summer heat. That total has been recognized as the most ever by an artist in a 24-hour period. Vocalist Nemoto Kaname (53) announced the news yesterday on the last night of the band’s latest concert tour. They celebrate 30 years in the business next year.

Aika Mire Fighting Fit
Former top Takarazuka star Aika Mire (45) was looking healthy yesterday as she promoted an autobiography detailing her battle with cancer. Appearing at the Book 1st store in Nishi-Shinjuku, Tokyo, she talked about how she has fought to regain her health after being diagnosed with malignant lymphoma in March 2008. The disease is a type of cancer involving cells of the immune system, but Aika underwent chemotherapy that allowed her to return to work by August 2008. She currently goes for testing once every three months, but she insists she’s feeling great. “I hope this book will be a source of strength for people with the same condition.” She added, “When I had to step down from a theater production because of illness, it was a huge shock. But it also reminded me how much I love this job.” Aika retired from Takarazuka in 2001 and has since worked on stage and TV. She and her husband (36) married on New Year’s Day of 2009.