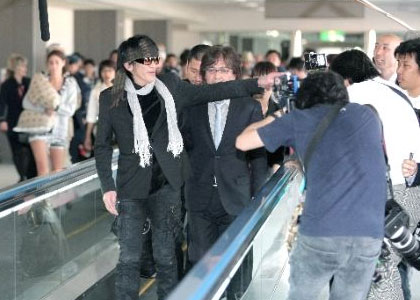 The media have been speculating on why rock star Tamaki Koji (51) came back to Japan alone yesterday. He and his new girlfriend, talento and former pin-up girl Aota Noriko (42), made no attempt to hide their romance as they flew to Hong Kong together at the weekend. Tamaki was scheduled to do PR there for the upcoming Asian concert tour by his band Anzen Chitai. But he arrived at Narita Airport solo yesterday, clearly the worse for drink and not too happy with reporters’ constant questioning about his relationship. There has been speculation that Tamaki is trying to persuade Aota to quit the Oscar Promotion management agency, who were angry about his recent explicit statements on their relationship.

“I told you, I’m Anzen Chitai! I’m not Aota” he repeated time and again. “I’m not a geinojin, I’m a singer!” And to prove his point he grabbed a microphone and sang a few bars before piling into a waiting car.

TV Asahi’s Takeuchi-ana Engaged
TV Asahi joshiana Takeuchi Emi (33) is engaged to be married, it was revealed yesterday. her fiance is described as a 33-year-old ippanjin who works in the sports industry. They are said to have met through work five years ago and romance began last year. They plan to hold a wedding ceremony next winter. Takeuchi is currently working as the sports presenter on the “Houdou Station” nightly news show.