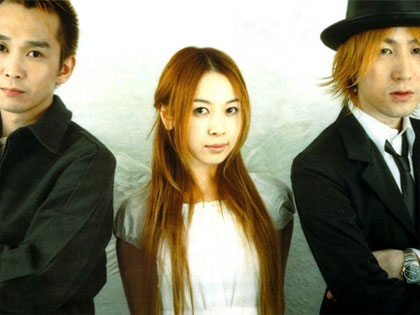 Guitarist Matsui Ryo (38, photo left) has quit the rock band The Brilliant Green. He made the sudden announcement yesterday on the group’s official website, saying only that the decision was for “personal reasons.” He addressed fans, saying, “I’m proud to have been a member of The Brilliant Green. I hope you will continue to support them.” The band only recently moved to the Warner Music Japan label and got back to business for the first time in two years. They released the single “Like Yesterday” in February.

Made up of Matsui, vocalist Kawase Tomoko (35, photo center), and bassist Okuda Shunsaku (38, photo right), The Brilliant Green was formed in 1995. They made their major label debut with the all-English “Bye Bye Mr. Mug” in 1997. The following year they had a breakthrough hit with “There will be love there,” which was also the theme for the TBS drama series “Love Again.” But between 2001 and 2007, Kawase worked more on her solo career as Tommy February6, and Matsui had a stint with his own band, Meister.

The New Faces of DoCoMo 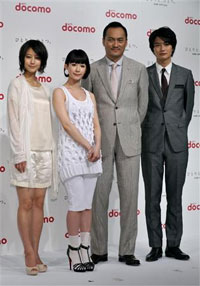 Actor Watanabe Ken (50) is one of the new faces of NTT’s DoCoMo mobile phone network. He teams up with young actor Okada Masaki (20) for a new TV commercial that airs from today, while actress Horikita Maki (21) and singer Kimura Kaela (25) pair up in a CM from next Tuesday. The four appeared at a PR even in Tokyo on Monday to announce the “Hitorito, Hitotsu” campaign. Asked what a mobile phone means to him, the Hollywood-based Watanabe said, “Due to my work, I’m often overseas or far away from my family. So for me it’s an important tool, a lifeline.”