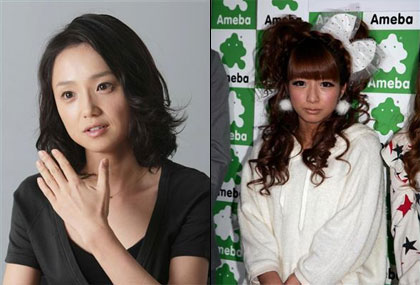 Some happy news for celebrities this week. Management for actress Nagasaku Hiromi (39, photo left) announced yesterday that she gave birth to her first child on May 18. They said that she and her baby boy have already left the Tokyo hospital. Nagasaku is taking some maternity leave but plans to return to her career. She and filmmaker Naito Maro (40) met in 2005 when he directed her in a TV commercial and they got married last year.

Talento and former Morning Musume member Tsuji Nozomi (22, photo right) is expecting her second child, her management announced yesterday. She and actor Sugiura Taiyo (29) have been married since June 2007 and had a baby girl the following November. Tsuji posted on her blog recently that she was feeling unwell and thought she had a cold, but it turned out to be good news. Since becoming a young mother, she has used that image on TV, in producing baby goods, and writing essays and a cooking book. In a survey last year that asked junior and senior high school girls to name their ideal mother, Tsuji ranked No.1.

And there’s what’s described as a “wedding rush” over at TV Asahi. World Cup commentator Kakuzawa Teruji (39) is engaged to marry an ippanjin on June 11, just before the big soccer event kicks off. Meanwhile, Nogami Shinpei (25) and joshiana Yagi Masako (24), both presenters on the network’s “Super J Channel” show, are to tie the knot as well. Three other TV Asahi announcers have revealed wedding plans in the last couple of months.