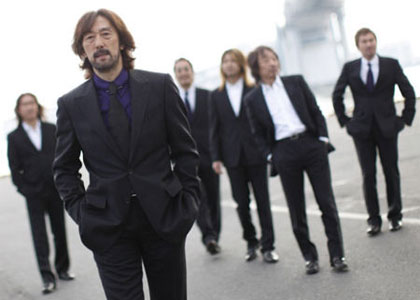 Jaywalk vocalist Nakamura Kouichi (59, photo foreground) was handed a 2-year prison sentence, suspended for four years at the Tokyo District Court yesterday. The singer was arrested last month when Tokyo Metropolitan police found a small amount of “kakuseizai,” or stimulant drugs, in his parked car in Nishi Azabu. They later found quantities of marijuana and cocaine and drug paraphernalia when they searched his home. In handing down his sentence yesterday, the judge said, “You continued your drug use in spite of the growing social condemnation of the drug problem in the entertainment business. I want you to ensure that you never again betray the people who have found solace and courage in your music.” Nakamura replied simply, “I understand” and bowed deeply.

He later spoke briefly with reporters and offered an apology to his supporters and fans. “For the sake of the band and my dear family, I will do my utmost to be able to sing once again in front of those who have loved Jaywalk.” he plans to enter rehabilitation for a couple of months before living in Nagoya with his common-law wife, talento Yano Kiyomi (48).

One of Japan’s premier rock bands, Jaywalk debuted in 1981 and had their first major hit with “Nanimo Ienai – Natsu” in 1991. That single sold 1.8 million copies, earning the band an appearance on NHK’s annual “Kohaku Uta Gassen” New Year’s Eve concert. They have remained active over the last two decades and released their latest single, “Sora to Kumo noyouni,” in February. Nakamura was previously arrested in 2007 for having an army knife in his car, in violation of the Firearm Control Law.

You the Rock Imprisoned
Meanwhile, musician You the Rock was given an 8-month prison sentence at the Yokohama District Court yesterday. He was arrested for marijuana possession in February. As he previously received a suspended sentence in 2005, the judge decided that prison time was called for. During the hearing, he said he planned to quit showbiz and was undergoing ascetic practice at a Buddhist temple in Nagano City.
Earlier story:
You The Rock Busted (Feb. 12 , 2010)