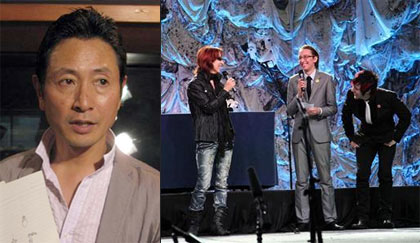 Actor Mitamura Kunihiko (56, photo left) is the latest celebrity in his 50s to show that romance can bloom late in showbiz life. He announced yesterday that he and a 30-year-old ippanjin from Kyoto registered their marriage on Saturday after a five-year relationship. She formerly worked for a TV production company in Osaka but now lives with Mitamura in Tokyo. Without wanting to sound cynical, the marriage announcement was timed to coincide with Mitamura’s recording of his first new single in 16 years. He married actress Nakayama Mari (62) in 1979 after they had appeared together in his movie debut. But they separated in 1996 following his affair with actress Takahashi Kaori (34) in 1996, and divorced in 1999.

X Japan’s Yoshiki at Chicago Anime Fest
X Japan leader Yoshiki was a surprise guest at the Anime Central in Chicago 2010 event yesterday (photo right). He spoke about the rock band’s upcoming shows in Yokohama and their eagerly awaited appearance at Lollapalooza in August. The band are scheduled to play on August 8, the last day of the festival, two acts before headliners Soundgarden. Their setlist includes the first performance of the new song “Born to Be Free.” A week later, they’ll head home to play two shows for 150,000 fans at the Nissan Stadium in Yokohama.