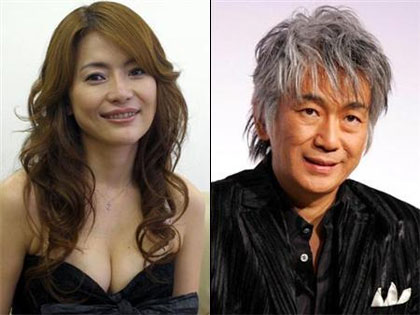 Everyone was taken by surprise at the weekend when rock vocalist Tamaki Koji (51) and talento Aota Noriko (42) both officially announced their relationship online. But no one was more angry about it than Tamaki’s former girlfriend, actress Ishihara Mari (46). That eventful relationship goes way back, as far as 1983, though 23 years and several marriages came and went before they were reunited in February 2009 (see below – she later changed her name to Mari). They tried to tie the knot at the time but it turned out that Ishihara’s divorce from her American husband had not been finalized. Then it was reported back in September that they had split up, but Ishihara says they were still trying to work things out. On her blog yesterday she said she was “stunned” by Tamaki’s announcement. “If a person refuses to face up to a problem they caused, and then tries to pass the buck, well that’s just perverse.”

Anzen Chitai singer Tamaki has been divorced three times, while former C.C. Girls member Aota has one marriage under her bodicon belt. She has been a fan since her youth, when she was a sex symbol of Japan’s late 1980’s bubble years, and the pair have known each other for some 20 years. Romance is said to have blossomed at the beginning of this year, though sources say they are not yet considering marriage. Tamaki and his band are currently preparing for a nationwide concert tour from July but the media will no doubt be more focused on his love life.
Earlier stories:
Tamaki Koji, Ishihara Mariko Together At Last (Feb. 26, 2009) 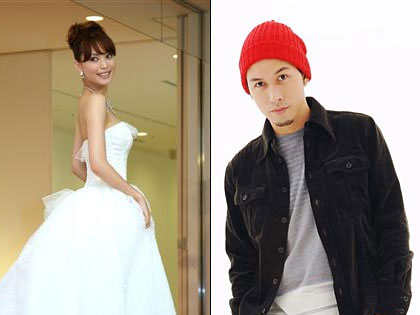 One step ahead are hip hop musician Ilmari (34) and popular model Ebihara Yuri (30), who announced yesterday that they have tied the knot. There was no mention of when they registered their marriage, but they visited Paris together in February and plan to hold their wedding ceremony in a church on the outskirts of the city on June 16. Romance between Ebi-chan and the half-Finnish member of hip hop group Rip Slyme was first reported about a year ago.

Another Blow for Waka
The Brilliant Green Guitarist Quits